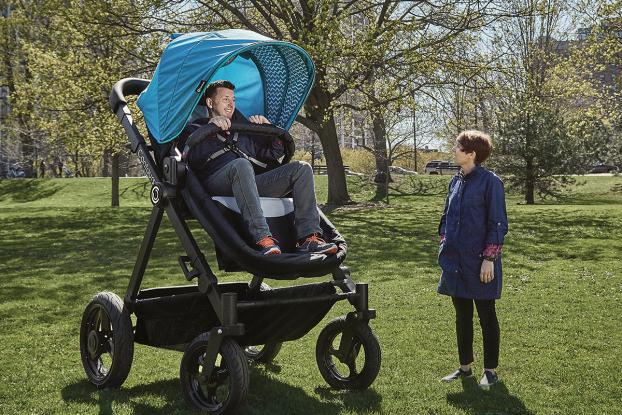 How are parents of infants supposed to get first-hand feedback on baby strollers if the only humans who have actually “used” the product can’t talk? Sure, they can read the description on the box or read reviews from other parents, but who’s to know if anything they’re reading is creditable? In reality, parents have talked the talk but haven’t walked the walk. Premium boutique brand, Contours from Kolcraft, came up with the perfect idea to receive first-hand feedback from humans who can actually talk…an adult-sized baby stroller. The brilliant team at Contours set up replica, adult-sized strollers in BuyBuy Baby stores and parks in multiple locations around the country. They filmed baby parents’ reactions as they pushed each other around the stores and parks. Not only were they able to capture the joy and comfort of the parents, but they created a scene that people couldn’t help but stop and take pictures.

The impact of these test rides had gone far beyond the stores and parks. According to Path to Purchase IQ, Contour’s video earned 53 million views in under a month and had nearly 50 million parents sharing the content on Twitter. The video and stroller were featured on talk shows such as “The Today Show” and “Good Morning America.” At year-end, they saw a 225% increase in website traffic and a 15% lift in sales per store, per week verse the previous year.

Creating buzz and going viral is great; however, it doesn’t always translate to increased sales. Contour was able to create an extremely entertaining and engaging video while also capturing creditable feedback from baby parents that were going through similar buying pains as millions of other interested parents across the country. By sharing the campaign on Facebook, Contour was positioning itself in the marketplace where nearly 40% of stroller shoppers consume their online research (Path to Purchase IQ 2017).

This campaign is a great example of how brilliant brand activation combined with a small budget and well-thought-out brand positioning, can help a company make a giant splash in the market.